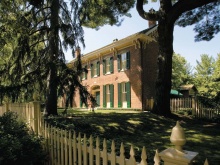 Join Jim Hayes for a special screening of 1142, a new documentary about Grant Wood’s Iowa City home. In 1856, a local brick manufacturer, Nicholas Oakes, completed the building of his house at 1142 East Court Street in Iowa City. Since then, each owner of 1142 has both nurtured and been nurtured by this significant and beautiful home. This documentary chronicles the owners of 1142. The rich history of 1142 is brought to life through stories and anecdotes about the people who both owned and visited the home.

Noted regional artist, Grant Wood, internationally celebrated for his American Gothic, lived, worked, and entertained an extensive array of fellow artists and writers while living at 1142. Wood moved into 1142 in 1935. During the next two years, Wood made the house his own through extensive renovation. He designed his own furniture, restored historic features, and changed the landscaping. Wood created many lithographs while at the house, including those for the Associated American Artists, and he featured 1142 in Parson Weems' Fable in 1939. Wood lived in this home and continued to teach at the University until his death in 1942. He is said to have considered his restoration of 1142 as is finest artistic achievement.

Other personalities featured in the documentary include pioneering physician, Pauline Moore, who raised her family in 1142, establishing herself as a leading family physician. Current owner, distinguished attorney, Jim Hayes, has meticulously and graciously restored the home, enriching the interiors with original art and noteworthy antiques. Jim will provide a brief introduction to the documentary and be available for questions following the screening.

The documentary was made with support for the University of Iowa Foundation.