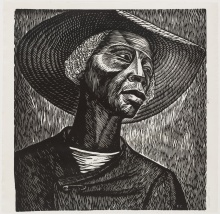 In September 2016, the University of Iowa announced that they would name the new Madison Street residence hall after renown alumna Elizabeth Catlett. In June 1940, with Grant Wood’s distinct support, Catlett received one of the first three MFA degrees from the university and was the first woman of color to earn this honor. After leaving Iowa City, she went on to become one of the most important American sculptors and printmakers of the last century.

According to the chapter dedicated to her in the book Invisible Hawkeyes: African Americans at the University of Iowa During the Long Civil Rights Era, Catlett overcame many challenges while living in Iowa City. The chapter’s author and former Stanley Museum of Art curator, Kathleen Edwards, stated that Catlett was attracted to the university’s program because she wanted to study under Grant Wood, and “Catlett’s tutelage under Wood had a profound impact on her creative development,” (59). Wood believed in this talented student. The MFA was a new degree and, at graduation time, Catlett’s required coursework was questioned. According to Edwards, Wood called Catlett and said, “I have something to tell you. We are going to try and get you the MFA degree. Come prepared for a battle,” (64). They won.

Catlett's career spanned over seven decades and two citizenships (United States and Mexico). Her sculpture and prints are a mixture of abstract and figurative, influenced by African and Mexican art traditions. While her professor, Wood encouraged her to "paint what you know." This notion is evident throughout her practice, from her thesis sculpture Mother and Child (1939) until her death in 2012.

The Stanley Museum of Art has an extensive holding of Elizabeth Catlett's prints.