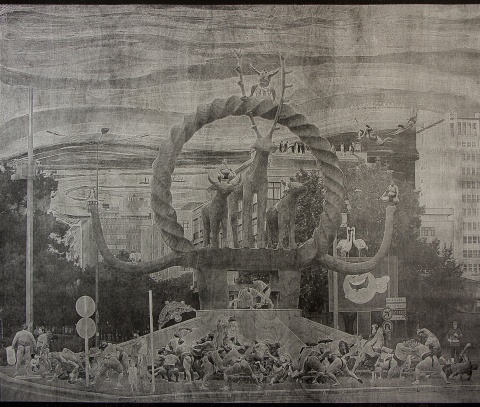 Serhat Tanyolacar is a Turkish-born printmaker, multi-media artist, political activist, and autism advocate. His large-scale relief prints focus on reconstructions of daily life imagery with the components of nostalgia and popular culture in critiques of contemporary political paradigms. His reconstructed narratives bring an absurd socio-political commentary over problems in politics, world economy, gender roles, nationality, and global culture. Tanyolacar defines the very beginning of the making of the art production as an information-gathering process, which relies on his own memories and the collection of global news. Using humor, satire, absurdity, and parody through public provocation allows him to have the ability to be a cultural producer rather than a political commentator.  Although he has expertise in all traditional print media, Tanyolacar investigates innovative and progressive use of printmaking as inter-media. He is one of the early developers of laser cutter printmaking. He has been using laser cutter block/plate making for his latest relief/ combination prints. Tanyolacar currently teaches at Polk State College.