The paper focuses on Salvador Dalí’s portrait of Adah Wilson McCormick, the third wife of Harold F. McCormick, the board chairman of the Chicago-­‐based International Harvester Company. This painting is one of the earliest of the many commissioned portraits of American socialites that Dalí completed while living in the United States between 1940 and 1948.  After debuting at Julien Levy’s Manhattan gallery in April 1941, the portrait appeared in a national travelling exhibition promoted as Dalí’s “last scandal” and the start of his post Surrealist phase. In May, Dalí and his wife Gala accompanied the exhibition to its next stop, the Arts Club of Chicago. The organization’s predominately female membership hosted a genteel tea party in honor of the artist and his portrait of a woman that most never fully accepted because she was her husband’s former nurse and 35 years his junior. Dalí used the portrait to secure other commissions, including a 1942 portrait of opera singer Claire Dux, who was the third wife of Chicagoan Charles H. Swift, a tycoon of the meat processing industry. Both women had married older men involved in the mechanization of agriculture and animal husbandry that American Regionalist painters so often denied existed.

Furthermore, the lifestyle enjoyed by these women and their spouses was diametrically opposed to the austere, agrarian Midwestern existence that Grant Wood’s American Gothic had impressed upon the public imagination following its 1930 receipt of an exhibition prize at The Art Institute of Chicago. Woods dour farm couple did not resonate with these wealthy Chicagoans, who hired a European artist to paint their portraits as a way of asserting their cosmopolitan tastes and values.

When the McCormick and Swift portraits appeared in a 1943 exhibition at M. Knoedler & Co Gallery in Manhattan, some reviewers inferred that these socialites from the hinterland were desperate for distinction within their competitive social set and that they had been foolishly wooed by an artist equally desperate for attention and money. This paper considers how Dalí’s relationship with his subjects plus the style and content of the resulting portraits complicates the myth of an essentially pragmatic Midwestern character perpetuated by Wood and other Regionalist artists. 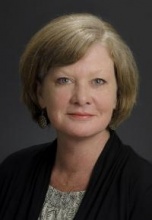 Mary Caroline Simpson received her doctorate in Art History from Indiana University and as an Associate Professor affiliated with Eastern Illinois University’s Department of Art, she regularly teaches courses covering European and American art of the 19th and 20th centuries. Her own scholarly research explores private and corporate arts patronage and art collecting trends in Chicago between 1940 and 1970 through various lenses including individual and instructional support for regionalism and surrealism. She has present numerous conference papers of aspects of this research as well as has published in journals and anthologies.