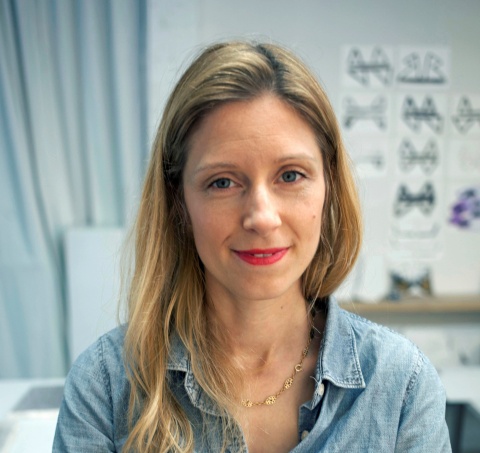 Eleanna Anagnos is a Chicago-raised, New York-based artist and curator interested in phenomenon outside of our definable experience. Her work explores the nature of human perception and elicits a physiological response where subjectivity, phenomenology, and the conscious act of seeing are addressed. Made from plaster or paper pulp, the work sits at the cusp between painting and sculpture and evokes a chain of associations: fossil, tablet, fragment, relic, mask, shield. The work is often read as simultaneously ancient and current, a similarity it shares with the cities of Rome and Athens, where Anagnos has lived.

Anagnos has received awards from The Rauschenberg Foundation (2019); Yaddo (2017); BAU Institute (2016); The Anderson Ranch (2011); The Atlantic Center for the Arts (2009) and the Joan Mitchell Foundation (2011,2009). Her work has been featured in The New York Times, Hyperallergic, Artnet, and The New York Observer, among others and her curatorial project, Wish Me Good Luck, was reviewed in Art in America. Anagnos shows her work nationally and internationally with an upcoming solo exhibition slated for April 2019 at High Noon Gallery in New York City. She earned her MFA in Painting from the Tyler School of Art (2005) and a BA with honors and distinction from Kenyon College with a concentration in Women’s and Gender Studies (2002). She has been a Co-director at Ortega y Gasset Projects since 2014.

Watch an interview with Anagnos.

Watch a presentation by Anagnos in partnership with the Stanley Museum of Art: