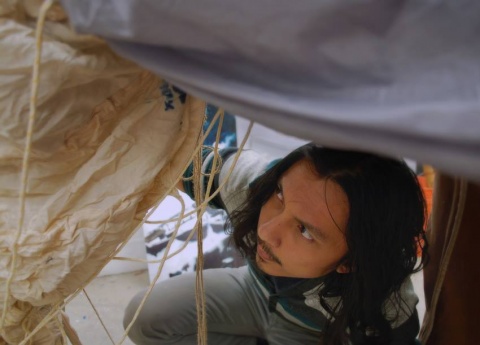 Given his past enlistment in the United States Marine Corps from 2001 to 2008 (serving two combat deployments), and in addition to having been born in the Philippines during a time of political turmoil and violence, Joe deVera’s work are often attempts to make sense of the absurd theaters of human tragedy; exploring the possible relationships between historiography and art objects, while simultaneously investigating the cultural networks of mass conflict.

His exhibition record includes solo and two-person shows in Philadelphia, Connecticut and Southern California, as well as an inclusion in a publication New American Paintings (Issue 111, April 2014).   He has been awarded the Joshua Tree Highlands Art Residency (2015), The Terra American Art Foundation Summer Fellowship (2016) and the Cloud Projects Prize (2016). In addition to his art practice, deVera also served as the curator for Aftermath, a four-artist exhibition that ran from November 2 to December 5, 2016 in Santa Ana, CA, which examines the resonance of war through the artist as a lived body (Santora Building, Santa Ana, CA).  Joe DeVera received his MFA in Painting and Printmaking from the Yale School of Art (2014) and his BFA in Painting from California State University, Fullerton (2011), where he also served as an adjunct lecturer for several years.