In Springtime: Myth and Memory in Grant Wood's Last Paintings

In spring of 1941 in Iowa City, with war abroad and anxious foreboding at home, Grant Wood began sketches for Spring in Town, which he finished that summer in Clear Lake along with Spring in the Country. Images of peaceful productivity, Wood's last Midwestern idylls (he died in February 1942) supported a galvanizing national myth: after the U.S. entered World War II, Saturday Evening Post enlisted Spring in Town as patriotic propaganda. Totalizing in its presumption of a homogeneous, white, middle-class, national audience, the Post presented the tidy neighborhood scene overlooked by a church as a response to the question "For What Are We Fighting?"

Although manifestly tranquil, Spring in Town belies a traumatic personal memory. This painting, completed while Wood vacationed in a cottage dubbed "No Kare - No More," emerged unconsciously from his greatest care of all: the childhood loss of his father and of the family's Anamosa farm. Significantly, Wood's first conception of the picture coincided with the fortieth anniversary of father's death on March 17, 1901. And as he began his composition, Wood chose for its central clapboard structure a house that stood at the edge of a cemetery. The earthen plot in Spring in Town doubles as garden and grave, while the figures surrounding it evoke family members who go about life without father, exiled to Cedar Rapids, to town.

Spring in the Country conjures a blessed time before that shattering experience. Here, father arrives with his plow horses, as child Wood helps mother set seedlings in the earth. In a prequel to Spring in Town, mining a happier memory, the artist presents his boyhood self in literal contact with the Iowa soil. It is a compensatory dream of reunion with his parents and his original home, defying mortal realities in his final year.

Sue Taylor is Professor of Art History in the School of Art and Design and Associate Dean in the College of the Arts at Portland State University, where she received the 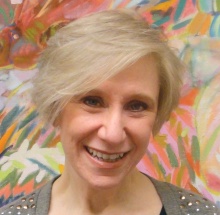 Kamelia Massih Outstanding Faculty Award in 2014. She earned her B.A. in art history at Roosevelt University and her M.A. and Ph.D. at the University of Chicago. A former museum curator and newspaper critic, she has written articles and reviews on modern and contemporary art for American Art, American Craft, Art Journal, Art News, ArtUS, the Chicago Sun-Times, Dialogue, Fiberarts, the New Art Examiner, and Oregonian. She is corresponding editor from Portland for Art in America.

Professor Taylor has received grants and fellowships from the American Association of University Women, American Psychoanalytic Association, Georgia O’Keeffe Museum Research Center, and the Society for the Preservation of American Modernists. Among her scholarly publications are Hans Bellmer: The Anatomy of Anxiety (MIT Press, 200) and essays on Paul Gauguin, Eva Hesse, Jackson Pollock, and Hollis Sigler, among others. Her essay "Grant Wood's Family Album" won the Smithsonian’s Patricia and Philip Frost Prize for 2005.