Used as a tub-thumping poster for US values in 1941, this homage to a bygone lifestyle became one of the 20th century’s most famous paintings

American dream ... Wood’s painting has been interpreted in many ways. Photograph: The Art Institute of Chicago, friends of American Art Collection... 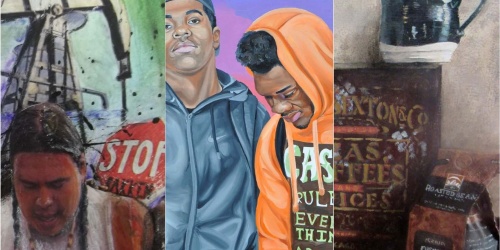 For 33 years, Dancers in Company has afforded University of Iowa dance students the opportunity to experience what it’s like to be part of a professional touring company. In the process, the student-performers get to share their art with audiences...

The Georgia Southern Department of Music and the Music Technology program present, the Root Signals Festival, February 9-11. Around 15 composers hailing from around the country will present their explorations at the intersection of music and technology, including 2015-16 Grant Wood Fellow...

February 8, 2017
Is Grant Wood’s famous painting serious or comic? It is this ambiguity that has helped made it one of the most parodied images in art history, writes Fisun Güner.
January 23, 2017

Christopher Jette will talk about his work Thursday, March 30 at 5 p.m. at the Digital Media Festival, hosted by Penn State Behrend. He will perform/exhibit with a collaborator on Friday, March 31 at 7:30 pm in Reed 117. Jette was a Grant Wood Fellow in Interdisciplinary Performance, Music,...

January 1, 2017
Early this year, the Royal Academy will cast light on American artists of the 1930s – the highlight of which is Grant Wood's iconic American Gothic on display for the first time in Britain – and, come autumn, another influential American figure will take centre stage. Jasper Johns is associated with key art movements of the 20th century, including Pop Art and Abstract Expressionism. This major new exhibition will feature his most recognisable pieces, as well as his more recent sculptural work.